ROCKFORD, IL — For 19 weeks in 1978, a local new/used car dealership was said to be brimming with “record numbers of walk-in customers,” all because of a weekly super hero newspaper cartoon advertisement featuring a caped car salesman!

It all began after local ad legend Terry R. Gossell approached the Captain with this unique, one-of-a-kind project, for a specific car dealer. Within days, VA-ROOM! “Super Swede” was born!

The title character represented “Swede” Clark, the dealership owner, who transformed into “Super Swede” by inserting a car key into his magic belt buckle.

Drawing on his comic book story-telling knowledge, Captain Cartoon plotted and wrote each strip — up to the last panel — where Ms Gossell added the all-important sales message.

The entertaining cartoon story, combined with those sales messages, worked, and Super Swede’s newspaper comic was the talk of the town! Kids and families gravitated to the super hero, who was portrayed in real life by a 7-foot-tall costumed actor.

Billboards, T-shirts and TV/radio commercials were produced, launched and aired — all culled from the actual strip. A “circus atmosphere” prevailed during the entire ad campaign.

But there’s even more to the story: “Super Swede” went on to be awarded the prestigious “Best Newspaper Ad Campaign in 1978” honor by the Northern Illinois Ad Council.

Why did Super Swede work so well? “It stood out on a classified ad page, where it appeared in the local daily each week,” says the Captain. “I intentionally focused on a good, entertaining story ‘with payoff,’ while Terry wrote the final words,” he says.

One of 19 weekly comic strips which served to sell Toyotas for a local dealership.

Captain Cartoon’s Latest Cartoon Billboard is Up as He Launches Online Drawing Lesson!

Right side of the mammoth cartoon billboard in Port Saint Lucie, Florida

PORT SAINT LUCIE, FL — When Captain Cartoon draws a political cartoon, people usually notice — and his latest cartoon opinion is no exception! Measuring 37 feet by 10 feet, this full-color monstrosity can be seen in all its glory on US 1 in Port St. Lucie!

The political cartoon billboard ranks as the Captain’s biggest ever (size-wise) — and was drawn in support of the local police department in its ongoing layoffs dispute with the city council. It caricaturistically lampoons local pols over perceived city misspending, and comes on the heels of two other “major” political cartoons produced by the Captain as billboards, all targeting “spend-crazy” politicians in West Palm Beach and Alachua County, Florida.

All his billboard cartoons were produced in support of police unions. (Note: The Alachua County cartoon was drawn “billboard-ready,” and though it was circulated on a flyer, there’s no evidence any billboard version was ever created.)

No stranger to cartoon controversy, Captain Cartoon’s political sketches were first published in his 1969 high

One of the Captain's first political cartoons published in 1969. He was 16 years old when this sketch was penned with a felt-tip. Uncle Sam looks more pregnant than fat here.

school paper, and on December 25, 1969, they began appearing in his hometown weekly. The Captain’s oft-favored subject: the local police. This would earn him his first parking ticket in 1971.

In 1977, One of the cartoonist’s most infamous sketches “inadvertantly” targeted the local police department, showing officers “on an emergency run to a local donut shop.”  Originally produced as part of a comic strip series in 1976, the strip was re-published in the Captain’s local newspaper following his election win as a city alderman.

Unaware “that” particular comic strip was published that week, the Captain became aware in a hurry after TV, radio, newspapers — and cops — began calling him.

“Everyone thought I was picking on police as an extension of my school newspaper days,” the Captain said. “And while this was accidental, the overwhelming notoriety opened my eyes as to the power of the political cartoon. I could have been elected Mayor that week, it was so popular,” he added. “People still talk about that today.”

The Captain eventually re-drew the strip and published it in Petersen Publishing’s famed CAR-toons Magazine 1n 1987.

Within months of the “Donut Debacle,” the Captain produced a series of cartoons targeting his city’s then-newly appointed police chief, whose financial and procedural dealings ran afoul of several city council members. After causing the local newspaper to do an “about face” from its initial support for the chief, these led to the appointment of a new chief nearly a year later. “Essentially, these cartoons ran the guy out of town,” he quips.

A second cartoon series was produced in defense of a police department’s removal of catalytic converters from police cruisers, an issue raised by the Federal EPA. In 1978 the Feds attempted to fine the city (Loves Park, Illinois) $18,800 for the alleged infraction, and the Captain was drafted by the Mayor to target the agency with a cartoon campaign by inverting the acronym EPA to “APE.” Copies of the cartoons were sent to U.S. Congressmen and Senators, and Sen. Adlai Stevenson III, citing that the government was being made to “look foolish,” finally prevailed upon the EPA to reduce the fine down to a paltry $1,200, (covering attorney’s fees.)

Cities very rarely — if ever — beat an EPA fine. This was a first.

Captain Cartoon would go on to produce “cartoon campaigns” for a variety of causes, culminating in two separate cartoon booklets, both of which generated headlines around the country in 1985 and 1986. One effort gained the endorsement of the then-Chairman of General Motors as well as the Governor of Illinois.

But this is 2010, the 21st Century. Are “cartoon campaigns” still viable in an era of digital media? “You betcha” says the Captain, “and this latest billboard cartoon proves it!”

“It’s an art unto itself,” he says, “one needs to know just how to do it. I’ve had forty years experience! Unfortunately, it’s an era of canned artwork and digital clip art. Access to newspapers, usually running syndicated national cartoonists, has been budgetarily sparse. BUT — the Internet provides a whole new opportunity for this kind of expression.”

In an effort to spark a renewed interest in the field of cartooning and cartoon promotion, the Captain has revamped his website’s “Fun Zone” as the Captain’s “Cartoon Chest,” featuring coloring pages, learn-to-draw lessons and his own intellectual property features, past, present and future.

He’s also ramped up his “history” page, and lists his major cartoon accomplishments on a political billboard cartoon promotion page.

“Part of teaching people how to draw lies in creating ‘purpose,’ ” the Captain says. “When people see what can be accomplished via cartoons and cartoon campaigns, they might jump into the fray. It’s never really enough just to learn ‘how,’ one needs to know ‘why.'”

“Had it not been for my school newspaper, I may never have chosen this field,” he says.”There’s much more to cartooning than comic books and national syndication. I’ll never win a Pulitzer, and you’ll probably never see my political cartoons in syndication (though he was syndicated three times with comic strips). “Localized political cartoons just don’t work that way.”

“Regardless, I’ve moved mountains with my work,” he asserts. “When a labor union nearly lynched me over a cartoon in 1980, that made it all worthwhile, because I knew I had made my point.”

Captain Cartoon is a caricature artist in South Florida. You can see his work here.

Captain Cartoon’s third political cartoon billboard has just been unveiled in Port St. Lucie.
Illustrated on behalf of the Port St. Lucie PD, over their current wage/job negotiations, “the billboard says it all.”
You can see more on this at http://www.captcartoon.com/news.html

Cartoon illustrations can be VERY effective in advertising!

Times are tough (and getting tougher) — so it’s more important than ever to keep those lines out and hooks baited fishing for customers. One key way is through comic strip and static cartoon advertising!

But who does it?

Having completed my third “cartoon ad” in the past three months, I can safely say “I do.”
But I don’t do nearly as many as I should, and I see too few samples of others. The biggest problem? Not much demand.THAT’S primarily due to “unfamiliarity” with cartoon/comics as ad vehicles.

In a future post I’ll get into the nuts and bolts as to “comic strip advertising”, but results truly speak louder than words…and I’ve posted some substantial results on my website (Linked to image at bottom).

So for those folks looking for unique ways to market their stuff — or for writers and artists looking beyond the comics industry — think about cartoon/comic strip advertising…I suspect you’ll be glad you did.

Just one thing…the cartoon ads mentioned above are all billboards — and response — as usual — is tremendous.
Nope, comics as a communications medium have not gone out of style. But they do have to be done “right.” 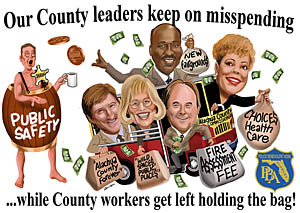 This cartoon billboard showing local pols on the "Boondoggle Bus" was unveiled in Central Florida October 7,